From Chris:
Part of our preparations for leaving has been to inform everyone about our plans and to say goodbye so we arranged a 3 day long open "house" for family and friends. It was a chance to show off our new home including all the improvements we have made. What a great time we had, but the Labor day weekend was as variable as my emotions. Saturday was so screamingly hot that I was afraid our guests would just melt away. By evening we had little storm bursts, off and on and by Monday, it was really chilly! Sunday evening my sister threw us an incredible going away party at her house, complete with pirate eye patches, Hawaiian leis, beachcomber hats, fish nets and even a live green parrot. Very emotional, lots of fun and with the assistance of gift cards we splurged and purchased a spot messenger so that our loved ones could feel better about our sailing away into the unknown.

So here we sit, scrambling to finish projects. We've sold our final land-based items and are waiting for a weather window to begin our trip. Tropical Storm Lee sat on top of us for several days; rained buckets and winds howled. Lee seemed like he was in no hurry to leave. Right now, it looks like Monday is the day, but this is subject to change.

It is rather amazing how things fell into place. We sold our house at almost the last possible moment to leave this year. Our vehicle sales went very smoothly and happened at the very last moment. We were even able to trade some large house sized Persian rugs this week for new boat sized ones.
Posted by Freedom at 9/10/2011 10:15:00 PM No comments:

Video: A look back at the future of the S/V Freedom

Sung to the tune of "Panic In Detroit", by David Bowie!

We sold Chris' car Wednesday and now I've sold my van today. We're car-less! That was the last big step before taking off. We have a few last minute projects to attend to before casting off Monday.

We hauled the boat out this morning to clean the bottom, change the "zinc" and check the running gear. Everything looks good and went smoothly.

Here is a snap from my crappy Verizon phone: 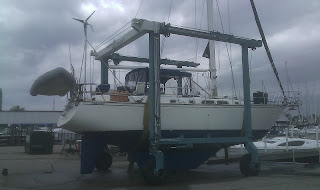 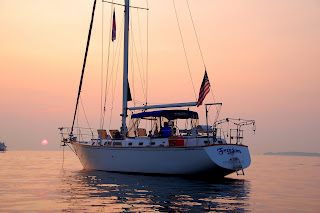 After years of planning & prep, we're almost there! I started thinking about buying a boat & going cruising in 1998. Chris bought into the idea around 2004. We sold our express cruiser power boat in 2005 and bought the sailboat in 2007. We were almost departing in 2008 when the poop hit the fan. We finally sold the house this summer and promptly sold off just about everything. No storage unit, no house; a few boxes at the relatives is all we kept that we aren't taking with us.
This last month has been extremely hectic trying to get rid of the last of our stuff, finish boat projects and sell the cars. But the end...and the beginning...is near!!!

We were planning on cruising from the Great lakes to Buffalo & the Erie Canal to the Hudson River and down to the Atlantic. But hurricane Irene did significant damage to dams on the Erie and they have closed it for the rest of the season. It's questionable if they will even open the canal next year. So implement plan B. We'll be sailing north up Lake Huron, under the Mackinac bridge into Lake Michigan and down to Chicago. We'll harbor hop along the way as weather permits. Don't need to give Gordon Lightfoot more material.

In Chicago we pull the mast for low bridge clearance down to the Mississippi River, up the Ohio and into the Tennessee-Tombigbee Waterway. The Ten-Tom is a series of locks, dams & canals, built in the Great Depression by the TVA. It will take us to Mobile, Ala. and the Gulf of Mexico. From there we'll sail down the west side of Florida to the Keys and hopefully make the Bahamas by January.

We hope to post regular updates here on this blog along with photos & videos. We also have a Spot Messenger tracking device that will plot our course on Google maps. All I need is to find the time to configure all this stuff!!